And there’s no way this was not deliberate. They took the most hysterical objections on Twitter–hardly a NEWS source–and promoted it as fact. Tor is hopping mad because it won’t get to claim a slate sweep for their ‘agenda’ authors. Though I’m quite certain that on the 4th or 5th ballot, the leftists in attendance will get together behind Leckie and squeak out a win over Skin Game. Because it’s–literary. Cause promoting. And dull as a root canal.

“Every normal man must be tempted, at times, to spit on his hands, hoist the black flag, and begin slitting throats.” 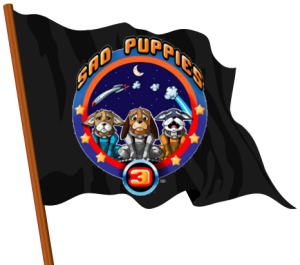 As a journalist I have long been appalled at the state of the industry and particularly what passes for “journalism” within the entertainment industry and gaming. As we found out with GamerGate, journalists were being paid for favorable reviews, which is a gross breach of ethics.

Fast forward to today when Entertainment Weekly published what can only be termed a hit piece on Sad Puppies, and founder Larry Correia and Sad Puppies 3 show runner Brad Torgerson accusing them of every PC sin short of miscegenation with a goat, which would probably be considered an alternative sexuality by this bunch.